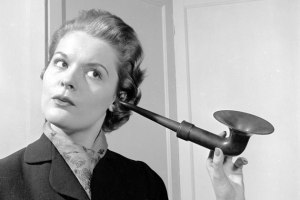 HEARING FROM GOD, by my friend Reg Chute

How do we hear from God, or more specifically, how do we “hear” God? There are many accounts in the bible that start off by saying  “Then God told Moses” or “Then God said to Abraham” or “Then God told Joshua.” What did it sound like when God was talking to these patriarchs of the bible? Was there a big, booming voice that said “THOU SHALT HAVE NO OTHER GODS BEFORE ME?” Well, that’s the Hollywood version, but, like anything else, we can’t really trust the accuracy of Hollywood.

There are times in God’s Word that it seems pretty clear that God was speaking with an audible voice, I’m thinking particularly of Moses at the burning bush, but apart from accounts such as the Garden of Eden where God was actually walking with Adam and Eve, those times are few and far between. In fact, you can probably count on one hand the times in God’s Word that God most certainly spoke with an audible voice. There are many instances that we can make that assumption but to say with certainty that He often spoke with an audible voice is a stretch at best. END_OF_DOCUMENT_TOKEN_TO_BE_REPLACED

Who is this Mike Zenker